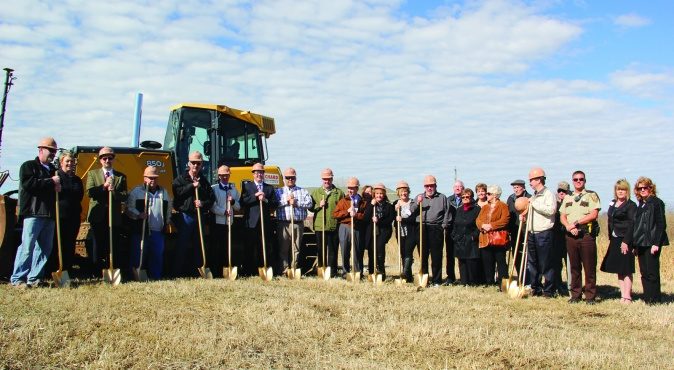 By admin 8th April, 2015 The Haven Comments Off

The Haven project groundbreaking and blessing ceremony held March 31 attracted a large crowd of community members and those involved in the project.

“We’re finally getting to see the results,” Curt Wilson, Peace Villa Board president, said enthusiastically at the blessing and groundbreaking.

Three years of planning have led up to this point. At the ceremony, various individuals involved with the project were recognized including former City Administrator Tom Simmons. “He’s really dedicated the seniors in our community,” Wilson said of Simmons.

He also highlighted the efforts of the city.  “A really important part of our whole process has been the City of Norwood Young America,” Wilson said. “We couldn’t have done it without them. He noted the efforts of City Administrator Steve Helget, the development team, the Peace Villa Board of Directors, the Senior Advisory Committee as well as the USDA, Donlar Construction and others.

NYA Mayor Tina Diedrick spoke briefly about the city’s involvement.  “It’s been wonderful to partner with this process,” Diedrick said. “It’s such an important project.” Funds for the $6.9 million project are coming from USDA Rural Development Loans which were acquired through the city and will be paid back with proceeds from the Haven.
This completed center will offer 25 units of assisted living and 12 units of memory care for a total of 37 units. It will be connected to Peace Villa and the Harbor.

The Haven is set to open in the spring of 2016. “I want to congratulate the whole community,” said Terry Louwagie, the USDA Rural Development State of Minnesota program director. Louwagie emphasized the USDA’s passion for projects such as the Haven senior living project. According to the USDA, once the project is complete it will provide 18 new jobs and the entire Peace Village facility will have a service range of more than 8,000 people.

Local clergy prayed over and dedicated the building. The Harbor Handbells, made up of current Peace Village residents provided a musical interlude while Laura Forst sang “Amazing Grace” to conclude the program. With sunshine and spring-like temperatures, the weather provided a pleasant backdrop for the event. “We could not have asked for a better day,” Brenda Schmitz, housing manager at the Villa, said. “Peace Villa’s board members would like to thank all those who made the day possible: the Senior Advisory Committee, the Harbor’s kitchen staff, the City of NYA Public Works Department, our volunteers and the Haven’s development team,” she added. According to Schmitz, the staff served dinner to 335 people.

“We were very pleased with the attendance,” she said. “We appreciate the local churches, business’ and community support.” The event was followed by a lunch that featured music by Dick Stolz.